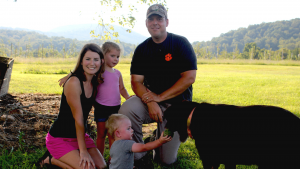 Nicole Coston wears many hats. She is a wife, mother, Dietician and, finally, a farmer. Coston and her husband, Brent Coston, are the owners and operators of Bearwallow Valley Farms. Settled between the Smokey and Blue Ridge mountains, Bearwallow has been in production for over 80 years. Brent and Nicole are the fourth generation of Coston’s to farm the land.

Brent and Nicole both held careers outside of agriculture before taking on the farm full time. Brent previously worked in industrial management and recently returned to the Bearwallow to learn the ropes of farm management from his father, David. “That was that huge leap of faith we took last year when my husband left his job. He was making six figures, his yearly bonus was more than what we make in half a year now,” said Nicole. The Costons’ leap of faith proved warranted when David suffered a stroke two weeks before harvest. By that time Brent had a full season of training under his belt and was prepared to fill his father’s shoes.

Nicole is a Registered Dietician who held the position of Nutrition Director at the YMCA of Western North Carolina. She championed efforts to combat food insecurity, in one instance even transforming an out-of-use school bus into a mobile food pantry and demo kitchen. “We recognized that where there is food insecurity, there are also barriers to transportation in those same populations. We would pair with housing developments and take the food directly to them,” said Nicole. Now, Nicole looks for ways to expand access to high quality food from the standpoint of food grower herself. 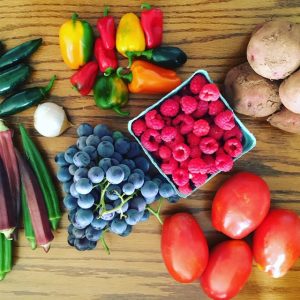 Bearwallow recently applied to start accepting EBT payments in order to participate in an outreach effort with Pardee-UNC Health Care that will steeply discount the cost of fresh produce for those who qualify for the Supplemental Nutrition Assistance Program. “The CSA boxes will be able to be purchased with EBT payment, but they will only be charged for half of their purchase, and the hospital will pay the other half. This is Pardee wanting to reach out to the community, and I think it’s amazing,” said Nicole. This effort also extends to EBT purchases made at local farmers markets.

Bearwallow’s CSA model also makes efforts to include more producers, as well as consumers. Bearwallow partners with other farms in North Carolina to source a wide variety of produce for their CSA offerings. “A CSA is a great model for farmers but not always for customers. They get overwhelmed by the volume of produce or they get bored with the same thing day after day,” said Nicole. According to Nicole, most CSAs have a customer retention rate of only 40% year to year. By partnering with outside farm operations to diversify their product offerings, Bearwallow has been able to maintain a customer retention rate of up to 84%. Coston also hosts Dietetic Interns who compose recipes, menu plans, and storage instructions to accompany CSA boxes so customers can make the most of their produce.

Bearwallow has maintained momentum on their accessibility initiatives, despite many obstacles recently presented by the coronavirus pandemic. “Our CSA is our largest source of income, and 75% of our shares got canceled. We were able to recoup some off that by increasing our presence on social media, but not as much as we expected,” said Nicole. Regardless, she maintains a strong belief that her farm and her family will be able to weather this storm. “It’s not really anything new for us necessarily. There are years where you’ll have major hail damage and that’s just it. If you are going to worry about everything that might happen to your crop, you’re going to be so emotionally exhausted you won’t even be able to take care of your crop. I know that someway, somehow my family will get fed and this business will continue.”

Donate to the Farmer Relief Fund

To help directly support farmers impacted by the current crisis, American Farmland Trust launched a Farmer Relief Fund. 100% of donations to the fund go directly to farmers like Erin and Rob.