When Elaine Prentiss was growing up, she knew she never wanted to be a farmer’s wife. But fate had other plans. When she was in college studying to be a teacher, she met her husband who turned out to be a farmer. She couldn’t be happier with fate. 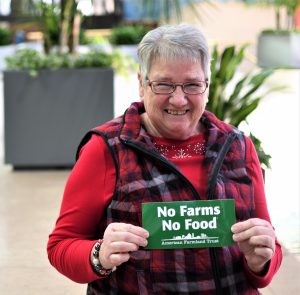 The drive for her to initially become a teacher and not be a farmer’s wife is what inspired her to become heavily involved in the farming operation. Over 40 years ago, it was quite uncommon for the majority of women to want to be involved on the farm because most of these women already did a lot of “house-wife chores.”

Because Elaine was a teacher, she knew that she needed to have more involvement on the farm. Elaine helped with decision making on the farm such as: the economics of it, who they were going to purchase seeds from, and how they were going to make their farm a better farm. Elaine has been going to the National No-Till Conference for over 20 years and this is the first year in which she has ever seen a program that was so relatable and educational just for women. Being a teacher, she said this was very inspirational.

A teacher never retires as most might say—and one task that she is most proud of is teaching the next generation about farming. Every harvest season, Elaine brings kids who are interested in farming from the local school districts to the farm to bail straw. She pays them $9 an hour and makes sure that they have fun. The kids all seem so engaged and excited to drive some of the equipment.

It is Elaine’s hope that many of these kids who are coming into farming have the same amount of passion as generations past. She hopes that the cost of farming doesn’t deter the next generation. We all have to make sure that we educate the next generation on farming so that everyone knows how important it is to support our farmers. If we don’t have a future of farming, then we won’t have the food to feed everyone in it.