Farmers and ranchers manage nearly one billion acres (or approximately 60 percent) of the land in America—land that can act as a natural carbon “sink” by absorbing vast amounts of carbon dioxide from the atmosphere and storing it in plants and soil. Unfortunately, the nation’s soil has degraded over time—losing more than half of its original organic matter content—resulting in erosion, soil nutrient losses, increased greenhouse gasses, and reduced productivity. We must reverse this trend. 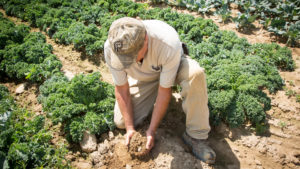 Adopting regenerative agricultural practices is among the least costly and most immediate actions that can help reduce greenhouse gas emissions on a meaningful scale. Their extensive adoption can serve as an important bridge until new climate-friendly energy and transportation technologies are developed. However, while there are a growing number of farmers and ranchers taking action to rebuild their soil and adopt soil health management systems, key barriers hinder more widespread adoption. AFT works with farmers, ranchers, and policymakers to overcome these barriers.