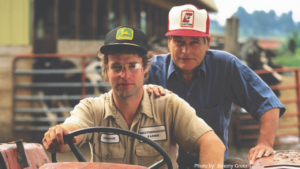 Upstate New York dairy farmer George Houser, Jr., became involved with farmland protection in the 1950s because he was concerned that local governments were ignoring their farmland loss. Armed with a degree in government from Harvard, Houser spent the decades that followed working with fellow farmers and citizens, American Farmland Trust, and his local planning board to develop guidelines that would save farmland. In 1988, he co-founded the Agricultural Stewardship Association, which became the first local land trust in New York dedicated solely to protecting agricultural land.

“People have to have food and the land to grow it. I feel like we accomplished a great thing.”  – George Houser, Jr.

Houser’s own farmland protection journey began when he and his wife Earline donated an agricultural easement to American Farmland Trust in 1988. He then spent more than two decades preserving the entire 1030-acre Brotherhood Farms piece by piece. Houser’s easement is now held by the Agricultural Stewardship Association.

In the process, he sparked a local farmland protection movement. His determination inspired many of his farm neighbors to protect thousands of acres of their own land.

Eugene Kwak, Togather: Building a Space for a New Generation of Farmers

With the help of AFT's Hudson Valley Farmland Finder, Eugene got his vision off the ground and found farmers to revitalize the farmland he purchased.