Teaching the Next Generation of Farmers

“I like to joke, but it’s true—most of the food we grow doesn’t make it off the farm because the students enjoy eating it so much,” says Eric Oberlecher, manager of the farm at Green Street Academy in Baltimore, Maryland.

Green Street Academy is a 6-12 public charter school with a focus on sustainability. The school’s farm is run by its high school students as part of the urban agriculture and aquaculture programs during the academic year, and they work as paid interns during the summer.

“Less than five years ago the land was an industrial wasteland,” says Eric. “We’ve brought the property back to life.”

The farm at Green Street Academy received a Brighter Future Fund grant to help supply materials, including seeds and equipment, for another year of agricultural learning. American Farmland Trust, with the help of Tillamook Creamery, launched the Brighter Future Fund to support farmers in the face of pressing challenges like climate change and COVID-19.

During their time at Green Street Academy, students don’t just help grow and maintain the produce and livestock on the farm, they also help Eric design and construct its infrastructure—including a hoop house and hydroponics shipping container.

“I know many of my students won’t end up being farmers, but running a farm allows for them to learn a lot of different skills. You’re not only a farmer, but you’re also a plant scientist, you have to know electrical work, you have to be an entrepreneur,” says Eric.

Add to that list a coder—during the school year, students even code food computers to control elements like temperature and light levels. 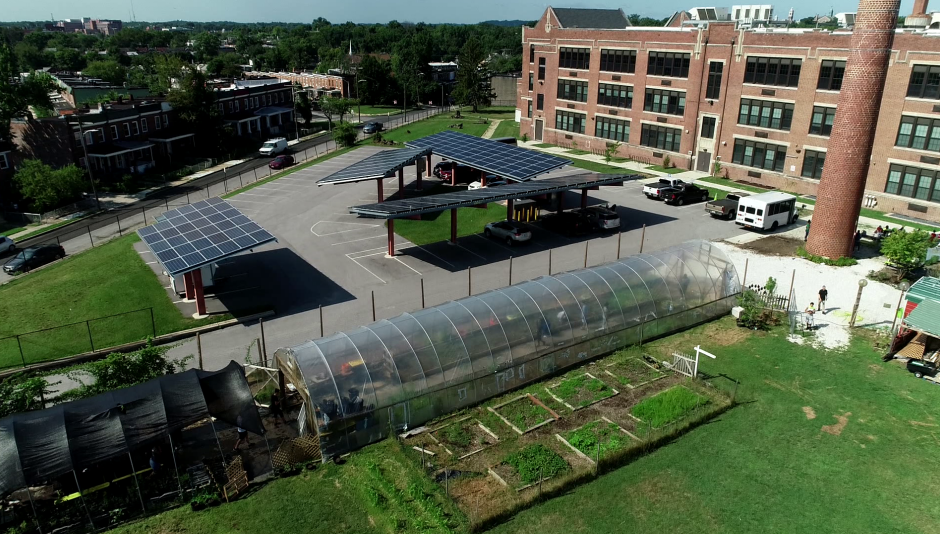 Their work has turned the school’s farm into a diverse, productive agricultural learning oasis complete with a native plants nursery, hoop house, orchard, chicken coop, aquaculture lab, and hydroponics system. Products from the farm are used at the school and sold or donated to the greater Baltimore community.

Eric says part of the school’s mission is to teach sustainability, not only for technology career tracks, but also so sustainability bleeds into the surrounding community. “We’re trying to give students stewardship skills to make their communities what they and their neighbors want them to be,” he says.

Informed by farmers, built on experience, and inspired by you. AFT’s Brighter Future Fund carries forward AFT's commitment to addressing inequalities in our agricultural system by providing grants up to $5,000 to BIPOC, LGBTQ+, and/or women farmers nationwide. Help us support another round of inspiring farmers by donating to the fund today! 100% of all funds raised will go directly to farmers to strengthen farm resilience, enhance farm viability, and improve access to land.