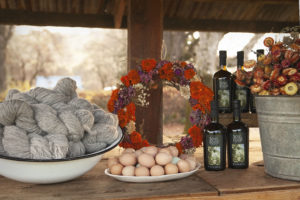 Last August, Alexis and Eric Koefoed stood at the end of their road watching as the LNU Lightning Complex wildfire raced towards their farm in Vacaville, California. When daybreak finally came, they drove through the police barricade and fought the fire for three hours. There was not any power or water, so they used shovels and worked to protect what they could. Their farmhouse miraculously survived. So did the lavender fields and the olive trees used for the farm’s olive oil. But about 80% of Soul Food Farm burned that night.

That night will live on in the memories of the Koefoed family, who operate the 55-acre farm in the historical agricultural region of Pleasant Valley Road.

“Fires have a life of their own,” she recalls. “There weren’t any firefighters here that night. There were very poor to non-existent evacuation efforts in Vacaville, so many didn’t know there was a fire until their home was burning. People were literally driving away with their trucks on fire, or they were jumping in swimming pools. Many were in a panic. It was awful.”

Afterwards, people immediately got to work. “Within a day, there was a major effort to help people with housing and food,” says Alexis. “The Pleasant Valley Agricultural Association sprang into action to get funding to farmers, shared resources, and connected people to volunteers. They continue to be an anchor for us. José Andrés of World Central Kitchen arrived in Vacaville to provide meals. Like many places, this town can be polarized because of politics, conspiracy theories, and fringe opinions. But people put all that aside and rolled up their sleeves. Folks are still being nice to each other, and this disaster has had a unifying response on our community.”

This is not a normal year for California’s historic 2020 fire season, which does not officially start until October.

“It’s clear that climate change is real,” she says. “But we don’t need to feel victimized or think we don’t have solutions for droughts, floods, or firestorms. We know through regenerative agriculture and holistic systems management that grazing animals play a significant role in fire prevention and land management. It is not just grazing animals. When we increase soil health and fertility, we add to the soil’s water–holding capacity and allow the soil to absorb more water during heavy rain events.”

“We have become so complicated in how we manage lands and farms. The answers are much simpler.” – Alexis-Koefoed

As a farmer, Alexis looks at the issue from a soil health and management perspective. In 2019, she led a field tour of Soul Food Farm during one of AFT’s California Women for the Land Learning Circles, where she demonstrated how she and her family were implementing regenerative agricultural practices throughout their farming operation.

“It doesn’t have to be like this,” she explains. “We think of animals as bit players because we’re so removed as a culture from our origins as agrarian people. Thousands of years ago, there were millions of grazing animals roaming the earth and managing land. We got rid of the grazing herds, we villainized cattle, and we are watching our soil disappear over the world. We wonder how to fix it with technology, but really the answer is in front of us. We have become so complicated in how we manage lands and farms. The answers are much simpler.”

What’s more complicated is how to keep a community going after such a devastating wildfire that impacts farmers, infrastructure, and services.

“The hard part is knowing what we are going to do now,” she admits. “We must repair basic infrastructure. The county has new regulations for cleaning up your property, so I have been on the phone for days trying to connect with a live person. I have seen 20 years of my life’s work burn up overnight. I’m relieved the olive orchard survived and the lavender fields, but the hedgerows and oak trees are gone. A lot of work just vanished. In a couple months, I will be 56 years old. My husband is almost 70. Do we start over again at this point? We haven’t decided.”

Not surprisingly, the fire had a big effect on this farming community.

“Many people aren’t coming back,” says Alexis. “I know at least 10 farmers who lost their farms in the fire. These aren’t young farmers. They are my age and are now scattered around the Bay Area. Others have learned their insurance companies are claiming farm policies were canceled months ago, despite cashing their premium payments. We are not selling my ranch yet. But we don’t know what we’re doing with it quite yet.”

Many people have offered to help this popular farm with physical help, but the type of work needed are big projects like removing trees or hauling off debris that should be handled by professionals.

“It’s a very humbling thing for farmers and ranchers to ask for money,” she explains. “But it’s the most practical way to help. There are numerous GoFundMe pages, and even just $10 helps farmers get back on their feet while they wait for insurance companies to pay. It allows them to pay for housing, food, and clothing. It lets them use the funds as they see fit.”

After the COVID-19 pandemic hit last spring, Soul Food Farm canceled its farmers markets and closed its farm stand. Recently, the farm partnered with Brazelton Ranch to sell its olive oil alongside the ranch’s stone fruit at Hank and Hazel’s Sausage Stand in Vacaville.

“Between the pandemic and the fire, farmers here are reeling,” adds Alexis. “They’ve lost their restaurant accounts, and then their farms burnt down, so it’s been a very challenging time for agriculture out here right now. The best way to help farmers now is to buy from them online as much as possible.”