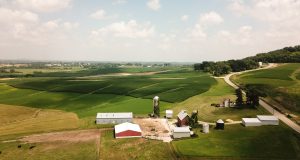 This is big! The final version of the Farm Bill just released last night—which appears to have sufficient support to be signed into law– contains a significant increase in funding for the vital Agricultural Conservation Easement Program. Over the next ten years, an additional $200 million per year will be allocated to ACEP.  That’s $2 billion more to help save some of the most important land in this nation, essential to both food supply and environmental health.

American Farmland Trust, the recognized national leader in farmland protection, has fought hard to secure federal funding to protect our nation’s farmland and ranchland since our founding in 1980. During this Farm Bill process, AFT targeted increased ACEP funding as its number one priority. And this focus paid off.

Though this Farm Bill does not provide all the agricultural reforms AFT would like to see, the bill nonetheless provides a much-needed degree of support and stability to a struggling farm community. Beyond this, the new money for farmland protection is a major victory for both farmers and the environment.

ACEP-ALE is the successor program to the Farm and Ranch Lands Protection Program, which AFT crafted and championed in the 1996 Farm Bill. In the 20 years between 1996 to 2016, ACEP-ALE and FRPP  together provided $1.5 billion in funding to compensate landowners for committing to keep their land in agriculture, ensuring that it would always be available to raise crops or livestock.

Without the new funding contained in this bill, overall ACEP funding would have remained at the 2014 Farm Bill “baseline” level of $250 million a year. Now it will be $450 million per year. Based on how USDA allocates funding between ACEP-ALE and ACEP-WRE, AFT estimates that about $180 million of ACEP dollars will flow annually to the ALE subprogram, directly supporting the permanent protection of farmland and ranchland.

Extrapolating that out, the new Farm Bill will likely provide around $1.8 billion for protecting farms and ranches over the next 10 years, compared to $1.5 billion invested in the previous 20 years. That represents a 240 percent increasese in annual funding for this purpose!

On the one hand, this is a great success. And yet, this level of federal funding is far from sufficient.

Assuming some inflation, AFT estimates that these funds will protect about 124,00 acres of agriculture land a year, which is only about 62,000 acres a year more than was protected in 1996-2016.  That’s way too little.

According to ground-breaking research AFT released in May 2018, our nation lost irreplaceable farmland at the rate of 1.5 million acres a year between 1992 and 2012, even with federal easement funding. AFT estimates that this new level of funding may, if we are lucky, save only 8 acres for every 100 acres lost to development. Quite simply, that is not enough.

Farmland is not only essential to ensuring our rural communities thrive and  all Americans enjoy a secure supply of nutritious food, but also to restoring our planet. Our research shows keeping farmland in farming is a powerful tool in combatting climate change. In New York, for example, farmland emits approximately 66 times fewer greenhouse gas emissions per acre than developed land. If the state reduced its annual conversion of farmland by 80 percent, it would be the equivalent of taking 1 million cars off the road.

While we are taking a moment to celebrate the success of increased funding for ACEP, we know the fight to ensure a thriving future for our farms and ranches is far from over. In the months and years ahead, AFT is committed to continuing to fight for federal farmland protection and to seeking out new and innovative policies to save the land that sustains us.