The most important Congressional news last month was around the budget deal, which will prevent a default on the national debt and allow the appropriations process to move forward in order to fund the government. The House Small Business Committee held a hearing on the challenges faced by young and beginning farmers. The month of July also saw more challenging weather for farmers across the United States, and a study from the Economic Research Service confirmed that the impacts of climate change will be costly to the farm economy.

On July 25, the House passed the Bipartisan Budget Act of 2019 by a vote of 284 – 149. The $2.7 trillion, two-year agreement includes a 3% increase for defense spending and a 4% increase for nondefense spending. It raises the debt ceiling and ends sequestration for discretionary (e.g. annually appropriated) funding, although it leaves open the possibility of sequestration cuts to mandatory funding (e.g. funding set in other laws including the Farm Bill) and extends the time period for these cuts from 2027 to 2029.

Now that top-line budget numbers have been set, appropriators will have to work quickly with an eye to the Sept. 30 government funding deadline. This will be difficult given that Congress is not back in session until Sept. 9.

On July 25, the House Committee on Small Business’g Subcommittee on Rural Development, Agriculture, Trade, and Entrepreneurship held a hearing entitled “Supporting the Next Generation of Agricultural Businesses.” Witnesses included a third-generation farmer from Iowa, a first-generation farmer from Colorado, a first-generation veteran operating an organic dairy farm in Minnesota, and a representative of the Farm Credit system that provides loans, leases, and other financial services to farmers and rural communities.

Several witnesses pointed to the current capital gains tax rates as preventing land from being sold to a new or next generation farmer, which in turn prevents them from making the long-term investments needed to grow their businesses. Farmer Jason Grimm—who runs a diversified operation on rented family land including pastured poultry and dry beans, potatoes, and produce—noted in his testimony, “Owning, rather than renting, would enable me to build a facility to properly store and operate the equipment needed to clean and bag my dry beans… In 2013, I approached my grandparents about buying a tract of their land but hit a roadblock. My grandparents—who I have gained a tremendous amount of knowledge from and who are now in their mid-eighties—are hesitant to sell the land because of financial advice warning them about high capital gains taxes.” 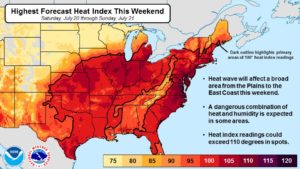 Coming on the heels of devastating rains that kept many farmers from on-time plantings, the extreme heat of mid-July has been even more damaging to already struggling crops.

The National Weather Service issued many health warnings for the Midwest and East coast given the high humidity and temperatures.

An Economic Research Service Report publicized by the USDA on July 22 studied the impacts of climate change on the cost of federally subsidized crop insurance. The research focused on three potential impacts: the increased yield risk from climate change, the indirect impact that yield risk would have on price risk, and the impacts of changing yields on the total value of farm assets.

The study found that, under a moderate emissions scenario, the future cost of crop insurance would increase by about 3.5% compared to an unchanged climate; that cost percentage increase was estimated at 22% for a higher emissions scenario.

To read the full report or summary, click here.

Both the House and Senate will be on recess during the month of August, meaning members of Congress will be back in their home districts and states. Given the slow pace of DC activity with Congress out of town, DC Updates will be on “recess” as well.