Providing a mechanism to compare practices, estimate costs, and determine where the greatest impact can be achieved across a state or region.

WASHINGTON, DC – Today, American Farmland Trust shares publicly its CaRPE Tool™, a web-based interactive tool that allows users to quickly visualize and quantify net greenhouse gas, or GHG, emission reductions resulting from the implementation of cropland and grazing land management practices. The user can quantify the current use and impact of key regenerative practices and then estimate the potential to sequester more carbon if these practices are applied more broadly, given the specific farmland resources in a state or region.

Our tool expands the utility of the data reported by COMET-Planner by layering cropland and grazing land acres data from the 2017 Census of Agriculture. For the first time, state policymakers, Soil & Water Conservation District planners, state and federal conservation agencies, land managers, and NGOs will be able to gather data and create maps to help them prioritize efforts for optimal climate benefits from agricultural management.

“In 2018, the Intergovernmental Panel on Climate Change stated that we must harness natural solutions if we are going to have any chance to reach the goals of the 2015 Paris Climate Accord. Agriculture is a powerful natural solution,” said Dr. Jen Moore-Kucera, AFT climate initiative director. “A key first step in developing policies and programs to support the positive role that agriculture can play in climate mitigation is to determine which practices offer the greatest net reduction in GHGs and how that plays out spatially across the U.S. The CaRPE Tool does that.”

By some estimates, as much as one-third of the carbon in our atmosphere could be returned to the soil through aggressive adoption of regenerative farming practices worldwide. And the U.S., with 10 percent of the planet’s arable land, can make a real difference. Drawing carbon from the air and storing it in agricultural soils offers an immediately available, low-cost, and proven way to address climate change. And no other option to combat climate change comes with more of the co-benefits we need for a sustainable future: food security, flood control, water filtration, and homes for wildlife and biodiversity.

As Dr. Moore-Kucera testified before Congress in October 2019, broader adoption of just two regenerative practices — cover crops and no-till — could reduce greenhouse gas levels by 148 million metric tons of carbon dioxide equivalents, or CO2e, per year. And full adoption could result in a drop of 294 million tons. That’s the equivalent of removing 62.4 million cars from our roadways.

In a demonstration of the tool focused on the Midwest, Dr. Moore-Kucera found that there is the potential to sequester 12.5 million metric tons of C02e by increasing cover crops from 5% of available cropland to 34%. No till and reduced till in these same states already has a 71% adoption rate, which has resulted in reducing GHGs between 27 and 32 million metric tons CO2e.

The greatest benefits, however, come when these practices are combined – cover crops help to add carbon to the soil and no-till helps protect that added carbon. Designing systems that address all four principles of soil health and optimize nutrient, water, and pest management results in systems that are environmentally resilient and profitable. 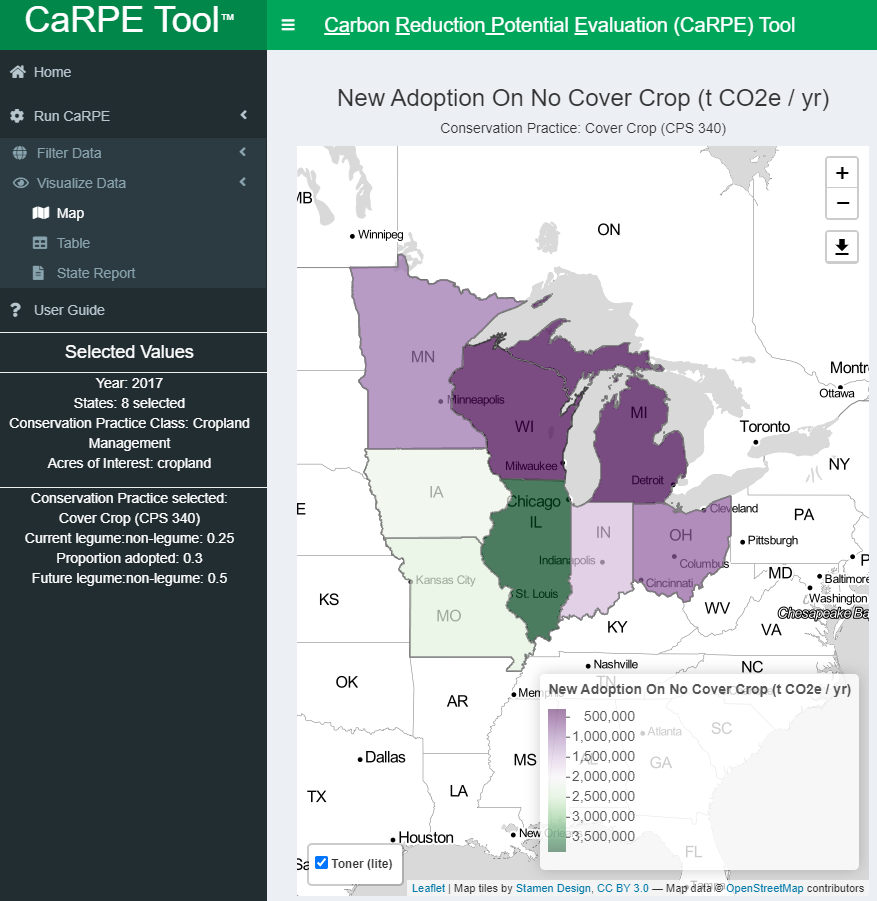 Thirty-percent cover-crop adoption is achievable. For example, across the New England region, cover-crop adoption is conservatively about 22% and expanding. If an additional 25% of available cropland adopted cover crops, the region could reduce up to 27,000 additional metric tons CO2e. In contrast to the Midwest, this region has only 45% of reported acres in reduced till or no-till management. By approximately doubling the acres converting from conventional to no-till, GHGs could be reduced by an additional 40,000 metric tons CO2e.

The CaRPE Tool was developed in collaboration with Dr. Daniel Manter, USDA-ARS Soil Scientist and funded in part by The Nature Conservancy, The Ida and Robert Gordon Family Foundation, and members of American Farmland Trust. Data generated with AFT’s tool also helped to expand and update The Nature Conservancy’s Nature4Climate initiative.

For a deeper dive on what the CaRPE Tool can do and to access the tool itself, go to CaRPE Tool.

American Farmland Trust is the only national organization that takes a holistic approach to agriculture, focusing on the land itself, the agricultural practices used on that land, and the farmers and ranchers who do the work. AFT launched the conservation agriculture movement and continues to raise public awareness through our No Farms No Food® message. Since our founding in 1980, AFT has helped permanently protect over 6.5 million acres of agricultural lands, advanced environmentally-sound farming practices on millions of additional acres and supported thousands of farm families.