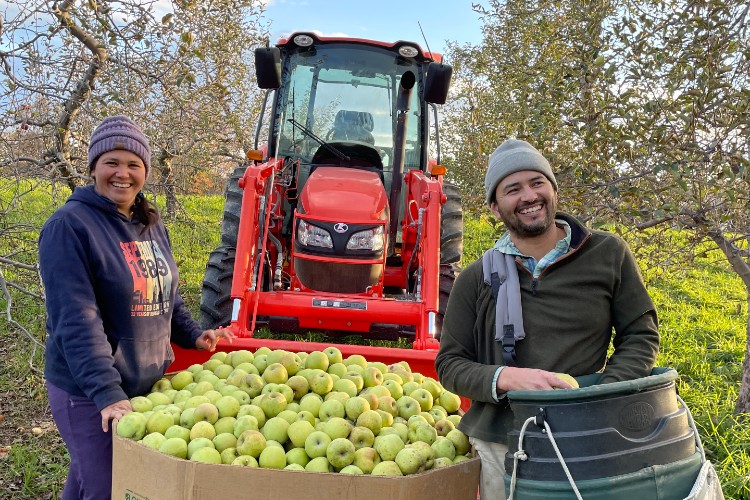 Carlos Aguilera was born into farming with his family in Central Mexico, who raised livestock and corn for market and kept a few milk cows and a large garden to feed their family. Self-sufficient homesteads like theirs were once the common way of life before globalization made it difficult for small and diverse farms to survive in Mexico, leading to displacement of families and economic hardship.

In 2002, Carlos and his brother came to the United States and started working in vineyards and orchards in the Finger Lakes region of New York. Ten years later, Carlos and his wife Lorena bought a home on a small piece of land and started growing a few things commercially, though they always had a garden since coming to the States. “Something was calling us back to the way we grew up,” Carlos said.

A nearby farm came up for sale and it was just the type of farm they were dreaming of – diversified and organically managed, a perfect distance to the city, and surrounded by nature. The retiring farmers had protected West Haven Farm with a conservation easement through Finger Lakes Land Trust, which really appealed to Carlos and Lorena. “That was one of the things that attracted us to this farm, the fact that the land has to be a farm and that the easement protects it from development.”

There was just one thing standing in their way – access to capital – a problem plaguing many next generation farmers. The farm Carlos and Lorena wanted was also owned cooperatively, which meant that the land wouldn’t technically be owned by them, they would instead be shareholders of the co-op. Carlos tried to secure financing from the bank, but it was too risky of a venture for traditional lenders. Fortunately, a friend believed in their vision and loaned them the money for the farm.

Once they were on the land, they had a new set of challenges to overcome from figuring out production and staffing to grappling with impacts of climate change. One of these challenges was producing a bumper crop of apples, carrots, radishes, beets, onions, and squash last year, and not having a place to store it all as their old walk-in coolers were falling apart. Unfortunately, they lost a lot of produce at the end of the season as a result.

Carlos and Lorena applied for a New York farm grant to address this issue for future crops through the Brighter Future Fund from American Farmland Trust with generous support from Tillamook Dairy and other partners. “It was very exciting to find out that we were eligible for funding,” Carlos said. “It’s very important for programs like Brighter Futures to support small farms, because many small farms go out of business – not because they’re lacking passion or hard work – but because producing anything in our society in a small amount is not cost-effective. This funding helps small producers have a better chance to survive.”

This fall, Carlos is constructing a walk-in cooler for his farm with funding support from the Brighter Future Fund. Cold storage for crops through winter will help support their staff and family with income while ensuring access to healthy food for their CSA customers. Carlos looks forward to continuing to connect with his community, to know the people who consume food from the farm by name, and to see his kids out in the field harvesting strawberries and experiencing a childhood that calls back to his own upbringing in Mexico.

“I’m really excited about being here for the rest of my life,” Carlos said. “I’d really like to be able to sustain the farm, and that the farm sustains us.” Learn more about New York farm grants here.