Darleen Krisher-Meehan: Getting the Whole Picture of Soil Health 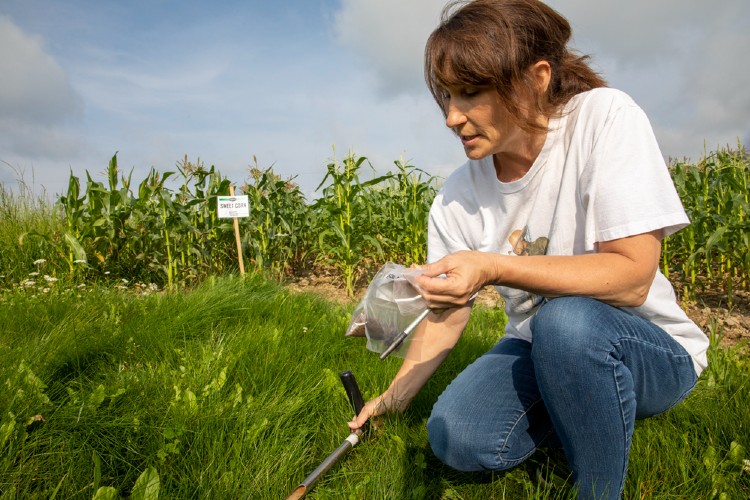 Despite growing up on a 200-cow dairy, Darleen Krisher-Meehan wasn’t involved in the operation and didn’t even envision working in the industry. After graduating from high school, she worked for a moving company until her brother drew her back to agriculture. He purchased a feed mill and needed a secretary, and she agreed. When her brother sold the business in 1999, the new owners offered Darleen a position, but then closed the mill five years later.

“Suddenly, I was out of a job,” she said “My husband was cash cropping and we decided to open our own store. I didn’t want to purchase the other business because I didn’t want to get into bulk feed.”

She soon discovered that she particularly enjoyed the agronomy side of the business, eagerly asking questions of customers and seed and fertilizer reps to learn about soil health and efficiency. Participation in the 2015 Empire State Food and Agricultural Leadership Institute program, or LEAD New York, further fueled her interest in soil health.

In 2018, Darleen read an article calling for applicants to participate in the “Practical New York Soil Health Specialist Training” program. Jointly hosted by American Farmland Trust, the Cornell’s Comprehensive Assessment of Soil Health program, in partnership with the Northeast Sustainable Agriculture Research and Education program, the training is creating a network of agricultural service professionals who can support and educate farmers on improving soil health. “I was fortunate enough to get accepted. It has been another great tool in my toolbox, a good resource to have,” she said. “I can reach out to anyone from the program with a question that I can’t answer for a customer.”

The two-year program brought the group together at six different farms focused on supporting soil health. The group walked the farms, looked at soil profiles and plots, talked with the farmers and equipment operators, and heard from leading researchers in the region. “Getting to see the equipment and how it influenced soil health brought it all together for me,”  said Darleen. “I’m not involved with the equipment on our farm, and I realized that sometimes that created a disconnect.”

Not only was Darleen eager to share her newfound knowledge with customers, but it also supported her interests in cover crops on her own family’s farm. When she suggested giving them a try, her husband countered that it was too expensive or that they didn’t own the right type of equipment. The Practical New York Soil Health Specialist Training armed her with the information to change his mind.

“He was that classic, traditional farmer,” she said. “I was able to convince him to try it with a small area. Last year we had 35 to 40 acres planted in cover crops, and he said he’s seeing that it has made a difference in the soil.

”Darleen is eager to share her knowledge with others. In 2019, they planted 15 plots of cover crops and hosted a gathering where farmers could see soil samples at different locations on the farm. She looks forward to hosting future events. “My seed guys have been talking to me about cover crops for five or six years before this program, but they really didn’t catch on,” she said. “In the last two years, they’ve gained a lot of momentum.”

Darleen currently serves as President of the Allegany County Farm Bureau. She is also a P&E representative on the NY Farm Bureau State Board and secretary for the Allegany-Steuben Holstein Club. As a teenager she never imagined her life’s work would follow in her parent’s footsteps, but agriculture and agronomy have become her mission. She has also passed along her love for the industry on to her children. Her son Nathan is involved with the cash crops and her daughter Mackenzie is returning to agriculture as well. The family has purchased a second seed mill for Mackenzie to run. Darleen credits the Soil Health Specialist Training Program with giving her more in-depth knowledge about soil health and utilizing soil sampling to get maximum yields for both her customers and her own farm.

This program is based upon work supported by the National Institute of Food and Agriculture, U.S. Department of Agriculture, through the Northeast Sustainable Agriculture Research and Education program under sub-award number ENE18-153-32231, and with support from the members of American Farmland Trust.