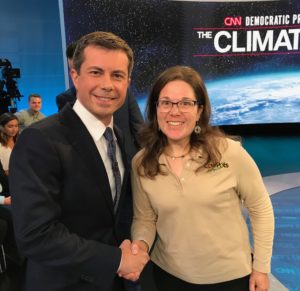 It was a proud moment for women farmers Wednesday night when Amanda Freund, 34-year-old dairy farmer from Connecticut, stood up at the CNN Climate Town Hall to pose her question to South Bend, Indiana, Mayor, Pete Buttigieg.

She took the microphone and asked:

The average age of the American farmer is 58. I am 34 and my family have been discussing transitioning our dairy farm, which inevitably will happen in the next four to six years. The economic and environmental challenges we are facing are unprecedented, from erratic weather to crippled export markets. How will you create more stability for the ag sector so that farmers can meet environmental regulations in response to climate change and stay in business?

The mayor hit the nail on the head with his response, “Farming is hard enough without climate change. But rural Americans can be part of the solution. There’s enough potential in our soil to offset all of the emissions of our transportation sector, and we need to unlock that.”

On behalf of American Farmland Trust, I’d like to thank CNN for holding this important event and for including leaders like Amanda in the conversation.

As the candidates were speaking last night, I was constantly reminded of the IPCC’s recently released report on climate change and land use. The report emphasized many issues that serve to affirm much of what we already know about the dire situation we face globally when it comes to climate impacts on terrestrial systems, including desertification, land degradation, and ultimately food insecurity.

As the new director of AFT’s Women for the Land initiative, what struck me so clearly in reading this report is how the reality of land degradation and land use decisions, exacerbated by climate change, will have a disproportionate impact on the most vulnerable, including women, children, the elderly, and those who are in poverty, many of whom have been given little recourse to influence how, or whether, climate change is addressed in a meaningful way. And many of these vulnerable groups live and work in  and for rural, natural resource-based economies.

This is not news; rather, it serves to reinforce what we already understand about how environmental degradation and climate chaos will disproportionately impact those in society with less power.

People with less power, particularly women the world over, often face more barriers to adaptation and thus have a diminished ability to respond to climate–induced changes.

Further, when women are excluded from decision–making, the resulting policies and actions are typically not designed to meet their needs.

What is more, food security is likely to be both impacted by climate change and made much more difficult to achieve given the more extreme and intense weather that we expect for much of the world.

Women, who are often responsible for securing food for household consumption, bear the brunt of these impacts.

But perhaps what struck me more than anything from the report was the emphasis on solutions that not only address the land and climate crisis, but also focus on multiple social and environmental goals that have the potential to solve land use and equity issues. Some of these solutions include:

AFT’s work with Women for the Land and the work of others like the Women Food and Agriculture Network who originated the learning circle model that AFT uses in its women-dedicated networking and learning sessions is aimed at working with women landowners in the U.S. to improve their access to resources that enable them to better steward their farmland, improve their knowledge of how to preserve and maintain land in agricultural production, and support their equal access to resources at the local, state, and federal level. This work is ever more pressing given the pressure on land development and the very real challenge that climate disruption has had and will continue to have on-farm country.

The report, to me, highlighted that in order to fundamentally tackle the problem of climate change and land degradation, we must look to build a more equitable future, one that has women’s empowerment and the engagement of marginalized groups at its core. This includes engaging and uplifting voices like Amanda’s. Fundamentally, action or inaction taken to respond to climate change is tied to social justice and equity concerns.

American Farmland Trust is a nonpartisan 501(c)3 organization. We work across the nation and across the aisle to save the land that sustains us. We do not endorse candidates or otherwise intervene in political campaigns on behalf of or in opposition to any candidate for public office.

Women for the Land Director