Fighting Wildfires in California with Prescribed Fires and Grazing

In the rolling Northern California hills near the town of Bodega, you’ll find the 213-acre ranching operation, The Ranch at Bodega. Owned by Algeo Che Casul, who goes by Che, with his Australian-born wife Angela and nearly 4-year-old son, he is the seventh generation to graze animals on this scenic property.

The young rancher’s fourth great-grandfather rode west with his cousin Kit Carlson to fight with the Texas Rangers in the Mexican American War. Afterwards he settled in California’s Central Valley, but one sweltering summer there convinced him a new location was still needed. He then moved west to Bodega on the California coast and settled on the family ranch in 1851. The family has been here ever since. Today the ranch grazes 60 head of goat, 20 head of sheep, 20 head of cattle, and has 25 acres of biodynamic Pinot Noir and Chardonnay grapes planted on the ridge. 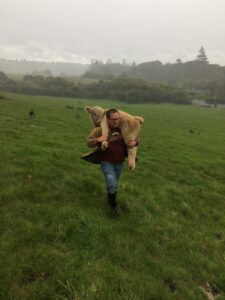 “This ranch is part of who I am and what I like to do,” says Che. “When you grow up in such a place, not only do you value it for itself, but I was lucky enough to have a grandmother and grandfather who spent a great deal of time teaching me the rhythms of the land, how to value what it produces for us and how to continue protecting and nurturing that land so it will provide for the generations that come after.

As my grandmother explained, ‘Sometimes the ranch is a blessing, but sometimes it’s a burden.’”

When he does have a minute to relax, where does he feel most at peace on his family’s ranch?

“There’s a big old oak on the ridge, where I married my wife,” explains Che. “Also, the front porch looks out over our valley and faces towards what we call the Petaluma Gap, where coastal fog gets sucked in from the ocean. We can watch the fog roll in, and most evenings I like to sit outside with a glass of wine or beer and just enjoy the view.”

During his days, however, his top concern is maintaining the ranch’s rich legacy for his young son. “Part of our heritage we need to continue is to keep the ecology healthy, the animals healthy, and to keep our pocketbooks healthy as well,” he explains. 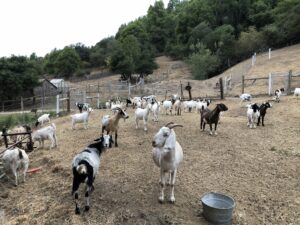 How does it feel to watch other ranches go away and the landscape change?

“It’s a little scary,” he admits. “Both my wife and I have jobs off property to support the ranch. I run a non-profit called Circuit Rider Community Services, which teaches at-risk youth through paid on-the-job training doing something outside and teaches a career skill such as wildfire mitigation work. I tell my youth that if you learn how to use a shovel or a chainsaw, you’ll never go hungry. My wife is an Intensive Care nurse, which has been an intense experience during Covid.”

What would this seventh-generation rancher like folks to know about his business?

“What many urbanites don’t seem to understand is that a lot of landscapes are not appropriate for farmland,” says Che. “My property certainly is not. I have poor soil, cold weather, fog, and steep slopes. This land is most appropriate for grazing.” 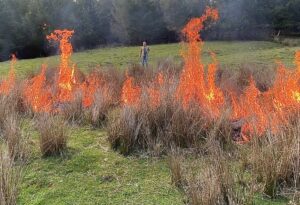 Che continues, “If we want to encourage healthy ecologies, we absolutely need to use the tools of prescribed fires and grazing animals. If the pandemic taught us anything, it’s that our food system is not as strong as we would like. Grazing animals can provide food during times of the year when there isn’t a crop growing season.”

When Che was growing up, he remembers it being a totally different ball game. Prescribed fires were a given, something that everybody just did.

Chainsaws and weed eaters are great, but California also needs the tools that ranchers have used effectively for generations, he says. Prescribed fires and grazing are ways to mitigate uncontrolled fires more effectively, cheaply, and in the case of grazing, create an economic benefit.

Illustrating this point quite clearly was an attempt by Cal Fire and a local prescribed fire agency to burn 33 acres of Che’s forestland twice. “There was simply no understory to carry the fire in the conditions present because my animals had grazed it down.”

“We are trying to create the ecology that was here before Europeans showed up and introduced invasive weeds and fire suppression,” he explains. “If you put grazing on these pastures in the summer, most of these invasive plants can’t compete. They don’t have the deep roots and ruggedness of our native California plants. Some native grasses have roots that extend 10 to 20 feet in the soil looking for moisture, so they can really be grazed heavily. Even when it’s bone dry in August, the natives just bounce right back.” 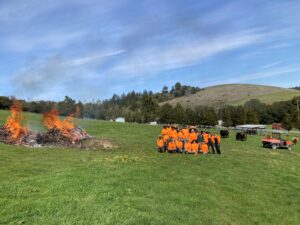 Che and his wife are both volunteer firefighters with the Good Fire Alliance, which is helping bring good fire to the landscape and allowing ranchers to do prescribed burns.

But it’s expensive to get kitted out. Firefighter boots are around $500, not to mention all the tools that are needed for the task. What they really wanted to get was a firefighting skid called a QTAC.

“This is a unit that goes in the back of a truck or an RTV,” says Che. “I wanted something with a 40-pound tank that was light enough to go on the back of my RTV. It’s a water system that has a Honda pump on it. It can be used to fight fires on your own property, but also to safely handle prescribed fires and pile burnings.”

That unit was just under $4,000, and was paid for with a Brighter Futures Fund grant. They’ve ordered the unit with the funds, but supply chain delays mean it might be a few months before delivery.

Despite the delays, a grateful Che says:

“We will have it when the strong fire season hits, and in the winter, when we do our prescribed burns. It will be priceless to know we are doing these burns in a safe manner. We will also bring that unit with us when we go out on community prescribed burns, while we work with them to make their landscapes safer. We are so grateful for the financial support that makes this possible.”

It gives him hope that it is becoming clearer to his community that they must graze open spaces.

“We need to involve agriculture in the solutions, because by nature, agriculture creates fire breaks,” says Che. “Whether it’s a vineyard or an orchard, that’s an open fire break. Or you’re grazing an understory, which is a shaded fuel break. That’s a piece that we often don’t talk about in agriculture. Yes, we are feeding folks, but we also are keeping our communities safer during wildfire season.”

All photos courtesy of Che Casul.