From City to Seaside, the Story of Little Ram Oyster Co. 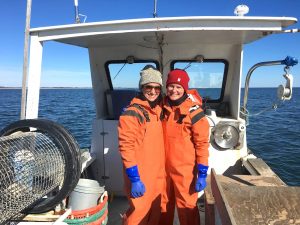 From the perspective of the millions who get starry-eyed about the idea of moving to New York City, Stefanie Bassett and Elizabeth Peeples had it all. They had intriguing jobs, Bassett in advertising and Peeples in interior design, a happy marriage, and a wide network of interesting friends. But as they began to consider the next phase of their life, the pair realized they were looking for something that was quite the opposite of their life in the concrete jungle. “We knew we could have moved to another city, but while there are so many great cities around the world, they’re not New York,” said Peeples.

Their search for the inverse of the Big Apple picked up steam when they attended an oyster-shucking class with some friends. “Until that class we had just enjoyed oysters and didn’t really know much about them. But then we learned how great they are for the environment, how nutrient rich they are, and how good they are for your body. All of a sudden we were hooked,” said Peeples. A few months later, Bassett typed “oyster farm for sale” into Google and the pair went to tour a turnkey oyster operation on the North Fork of Long Island. “We put an offer down soon after, and the rest is history.”

Neither Bassett nor Peeples had any experience farming oysters, nor any kind of connection to the North Fork area. But this would-be obstacle only encouraged Bassett and Peeples to put in the work to show their neighbors they’re here for the long haul. “We bought a turnkey farm, meaning someone had already set it up. We understood that that was the way we needed to get into this industry because we didn’t have the background to start something from scratch. So I think it took a minute out here for people to determine, are these just women who want to have a cool hobby or are they really out there to get it?” said Peeples. 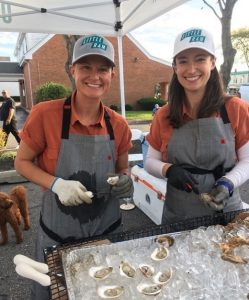 The recent COVID-19 pandemic also strengthened the couple’s relationships to their new community and accelerated the trust-building process with other farmers in the area. “Everyone has really come together to be supportive of each other. We are a small area out here, so the success of one farm is the success of all the farms,” said Peeples. North Fork boasts an impressive diversity of operations for its size, incorporating traditional land farming, oyster farming, fishing, vineyards, and wineries in its 30-mile stretch.

Although they’ve acclimated to their new lifestyle, the couple haven’t completely forgotten their urban roots, and they feel optimistic about the future of relationships between city residents and local farmers in New York state. Little Ram Oyster Company found its first customers in the city immediately after its founding and until recently were making weekly trips in for deliveries. They are now shipping orders in to comply with COVID-19 safety regulations.

Peeples hopes that the North Fork area will eventually establish a reputation similar to that of the Hudson River Valley, another agricultural region of New York state. “Everyone sees the Hudson Valley as a really rich, fertile area, and Long Island is as well, especially out our way on the North Fork and the South Fork. And here we also bring aquaculture and fishing into the mix,” said Peeples. She envisions a network of buying and selling that would promote fresh and local food for all New York residents. “If you look at it, the Hudson Valley is two hours away from the city and the North Fork is also about two hours away, so you end up with the city as a hub where a lot of people are interested in supporting local purveyors, sourcing locally, eating locally. All of those things become really kind of easy not only for the consumer, but for the farmer as well.”

Peeples’ prediction is one of mutually beneficial connection and support between the city center and the surrounding agricultural communities. There is much to be gained on either side, as it was Peeples’ attuned ear to the happenings of the city that led her to apply for American Farmland Trust’s Farmer Relief Fund. “I found out about the Farmer Relief Fund grant through ‘Edible Manhattan.’ The city can be a hub of agricultural support. It can be a central point for actively seeking and supporting local products, farmers, and small businesses.” Perhaps the state itself is not so different from the peninsula of the North Fork, where a colorful array of diverse farming operations equate the success of their neighbor with success of their own.