In the Pacific Northwest our most productive, versatile, and resilient soils are limited – and irreplaceable - American Farmland Trust

In the Pacific Northwest our most productive, versatile, and resilient soils are limited – and irreplaceable 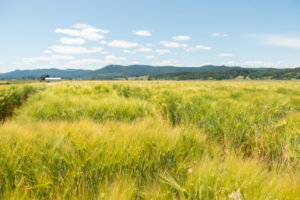 Farming and ranching are key to the Pacific Northwest’s communities, economy, and way of life.  Farms and ranches are such a familiar part of the landscape that it’s easy to take them for granted and assume they will always be here. But AFT’s newly released, “Farms Under Threat: The State of the States” tells a different story.

“Farms Under Threat” shows that the future of agriculture in the Pacific Northwest is significantly threatened by the conversion of our farmland and ranchland.

“Farms Under Threat: The State of the States” shows the extent, location, and quality of each state’s agricultural land and tracks how much agricultural land has been converted in each state using the newest data and the most cutting-edge methods. It also analyzes the six most widespread farmland protection programs and policies, ranking state performance with the Agricultural Land Protection Scorecard. The report and its associated interactive website are breakthrough tools for analyzing state efforts to make sure farmland is available to produce food, provide essential environmental services and help mitigate and buffer the impacts of climate change.

The report demonstrates some clear wins in Oregon and Washington state. In comparison to other states, the overall threat to Oregon and Washington’s farmland is relatively low, and both states’ policy responses have been strong. This is thanks – at least in part – to strong land-use planning programs, and to the hard work of land trusts and other conservation organizations over the last several decades.

That said, our work in the Pacific Northwest is far from finished. Development is still threatening our most productive farmland. Between 2001 and 2016:

The overall threat of farmland loss in the Pacific Northwest is deceptively low. While our agricultural lands are plentiful, our most productive, versatile, and resilient soils are limited – and irreplaceable. The COVID-19 pandemic has reinforced the importance of regionally diverse and resilient farm economies. Washington, Oregon, and Idaho must act now to permanently secure their most productive, versatile, and resilient farmland. To achieve this goal, state and local governments must work in partnership with local communities to develop a comprehensive set of policies and programs that address not just land protection, but also farm viability and the transfer of land to the next generation.