Making Space for People and Plants at Rise and Root Farm 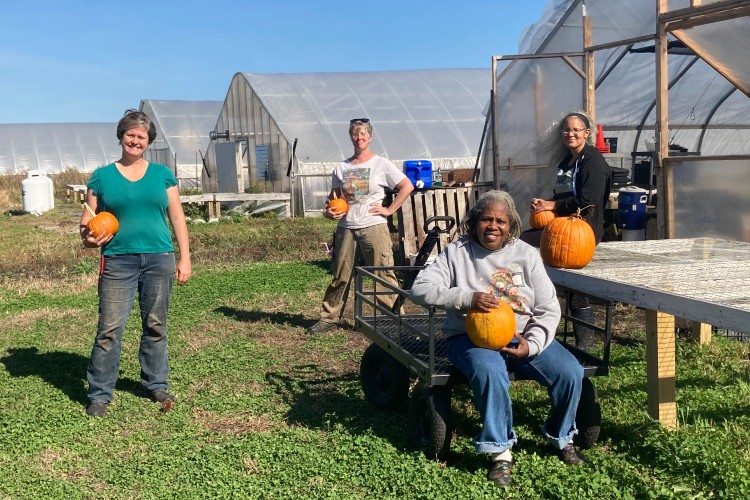 Michaela Hayes-Hodge is one of four owners at Rise & Root Farm in Chester, New York, growing vegetables, herbs, flowers and plant seedlings for their local community and customers in New York City. A recipient of farming grant, Brighter Futures Microgrant, the farm is run cooperatively by four owners who are women, intergenerational, multi-racial, and LGBTQ+, with a mission rooted in social justice and the healing power of food and farming to build a more equitable food system.

“We’re just so blessed to have each other as farm partners,” Michaela says. “Partnerships can be incredibly difficult also, and we’ve done a lot of work around making sure that we stay healthy as partners.” Previously a professionally trained chef and food preservationist, Michaela had experienced running a solo business and says she would never go back.

“When people saw us leave the city in 2015, they were like, “Oh my gosh, you had this dream and then all of a sudden it’s a reality,” Michaela says, “and a really important piece of the story is that it wasn’t all of a sudden. Five years earlier we sat down with each other and said, “Okay, how are we going to get there? And if we want to be on the land in 2015, what do we each need to do this year to make sure that happens?” Each owner charted their own pathway to farming, whether it was winding down their 9-5 career or gaining more farming experience at a different scale. Ultimately, they found five acres available for a renewable, 30-year-lease at the Chester Agricultural Center, which is home to several farming enterprises, and only an hour’s drive from the city.

Last year, Rise & Root Farm secured a large contract to grow seedlings for NYC Parks GreenThumb, serving community gardeners throughout the city. During the pandemic, this was their one source of guaranteed farm income. Michaela and the team experienced more customers approaching them at the farmers market to ask for guidance for growing their own plants, too. “It was just such a year of increased food insecurity that it became even more important to find ways to help our communities have more food security – and growing your own food is definitely one of those ways,” Michaela says.

However, growing the seedlings in the existing high tunnel structure on the farm was challenging, especially if they wanted to scale up. Rise & Root Farm applied for a farming grant, Brighter Futures Microgrant from American Farmland Trust and Tillamook, which provided them with $5,000 to upgrade their high tunnel to a fully functioning greenhouse with water, electricity, and heat. The timing was especially critical, as they doubled their trays in 2021 to grow 43,000 plant starts for GreenThumb to distribute in the city.

“It has been such a game changer for this season to not have to worry about the plants freezing overnight and to be able to water whenever we need to,” Michaela says. Last year, they covered each seedling tray with a protective cloth when the temperatures dropped and had to wait to water plants until the sun thawed the frozen hoses running across the driveway. The electricity also powered space heaters in the greenhouse during the colder months, which enabled the team members to safely meet with each other and socialize in a ventilated space during the pandemic. “Thank you to American Farmland Trust and Tillamook for the grant because it has definitely been game changing in helping us to get the greenhouse, which is basically the hub of our farm, to a place where it is completely livable for us and the plants. It has been such a gift and we really appreciate it.”