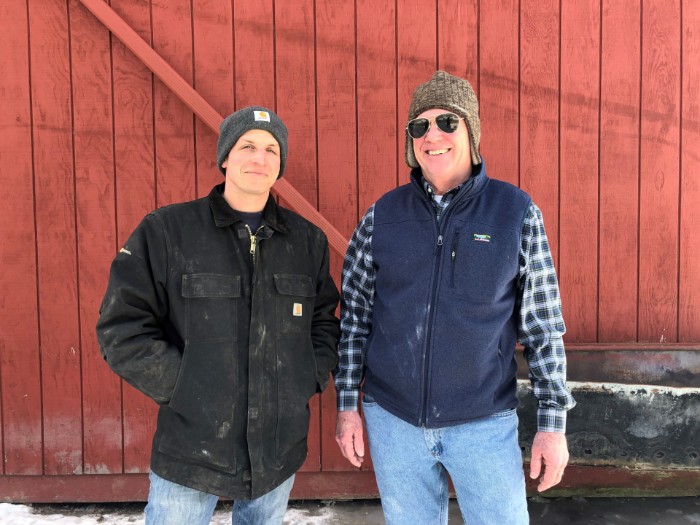 When I set out to sell my farm, it was important to me that it went to another farm family who would care for the land as my family had. It was a struggle to hold on to my small grass-fed beef farm for as long as I did, persisting through pressures for farms like mine to ‘get big, or get out.’

But I had made a promise to my wife that I wouldn’t work myself to death, and it came time to find another farmer to continue stewarding the land.

I have always been a firm believer in direct marketing. I believe direct marketing in local communities is the concept behind community supported agriculture, or CSA. So naturally, it made sense for me to directly market my farm. 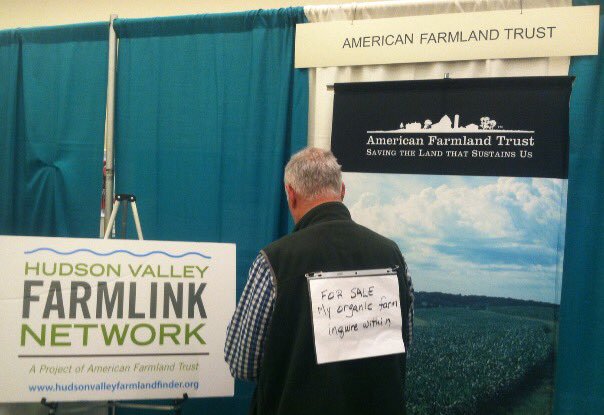 Above is a photo of me from 2016 at the Northeast Organic Farming Association’s conference in Saratoga Springs, New York, with a sign I put on my back to advertise my organic farm for sale.

It was a year after I first discovered American Farmland Trust and the Hudson Valley Farmlink Network, where I created a profile and listed my farm as one of the first users of the website. I got much more traffic from this website than I expected and much more than either of two realtors generated.

In the last 10 years there has been a resurgence in interest in agriculture among a younger group of soon-to-be-farmers. These folks have the new technological skill sets that we Boomer Farmers are still trying to wrangle. Given that, the evolution of AFT’s Hudson Valley Farmland Finder website fills the niche for new, younger farm-seekers.

At the same time, young farmers struggle to access capital, especially with a business that may show long periods of low or negative income. I could have sold my farm sooner to someone who had the means, including a buyer from Hong Kong who was looking to purchase 200 organic farms.

But I wanted to pass my farm to someone who was going to come into the community and put roots down. And for me, it was worth the effort to keep searching.

In the fall of 2017, I was contacted by a farmer from the Hudson Valley Farmland Finder, Josh Rockwood, who was interested in my farm. I had been in touch with other potential farmers before, but when I met Josh, I could tell he was serious.

He was a small livestock farmer who had been given 3 months’ notice to find a new farm after losing his lease on 100 acres. Josh and his family came out to visit the farm and see my cows, and shortly after we were sitting in the kitchen discussing the sale over a cup of coffee. We went back and forth two or three times, shook hands and had a deal.

As American Farmland Trust celebrates the fifth anniversary of the Hudson Valley Farmlink Network, I’m thankful for the connection I was able to make with Josh and hopeful for other farmers in my position finding their successor.