Why Does Central Ohio Matter to the Gulf of Mexico?

The Upper Scioto River Watershed – Farming for Cleaner Water Project, or USRW, is an American Farmland Trust water quality initiative in central Ohio. Farmers rely on two major nutrients in fertilizer, nitrogen (N) and phosphorus (P) to grow crops. Once in the Gulf, these nutrients rob the water of oxygen, leading to a massive hypoxic zone (also referred to as a “dead zone”) where marine life struggles to survive. Over 70% of the nutrients causing the hypoxic dead zone in the Gulf of Mexico and impaired streams throughout the Mississippi River Basin stem from the unintended consequence of agricultural production.

Ohio has nearly 14 million acres in agriculture, representing about 53% of the state. Also, the Ohio/Tennessee sub-basin is the largest contributor of both N and P to the Mississippi River at 41% and 38%, respectively.

Why Does the Upper Scioto River Watershed Matter?

Central Ohio watersheds, including the Upper Scioto River Watershed, are prioritized in the Ohio Nutrient Reduction Strategy as they contribute significant loading from agriculture and are key levers to achieving Gulf hypoxia goals (Ohio EPA, 2013). These statistics illustrate that Central Ohio has a significant and disproportionate impact on Gulf water quality. Given the predominance of agriculture—in land use, economic importance, and political power—working with farmers and landowners is the only way to lower current nutrient inputs. To succeed, any solutions for clean water must also ensure thriving and viable farms. 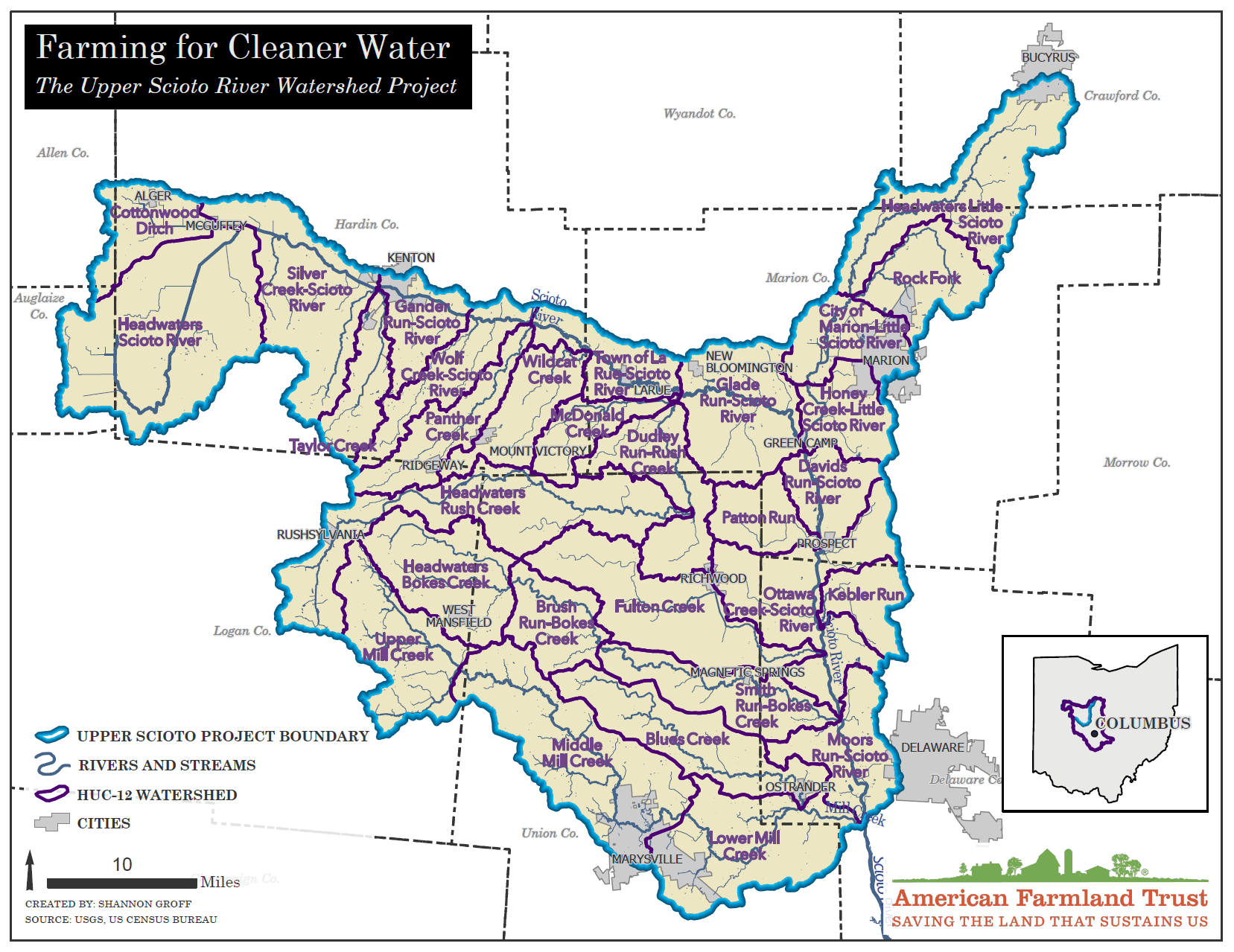 With support from the Harte Charitable Foundation, AFT is partnering with stakeholders in the Upper Scioto River Watershed to reduce nitrogen and phosphorus loss from farmland. This project aims to improve water quality in the Upper Scioto River Watershed and achieve a 30% nitrate-N reduction established by the 2006 Upper Scioto Watershed Action Plan. Nitrate-N will be measured at the surface water intake areas for the city of Columbus to ensure the city’s source of drinking water is protected.

How does TSP, or “triple”, Impact the Upper Scioto River Watershed? “Triple” was one of the first high-analysis phosphorus (P) fertilizers widely used in agriculture. Many older farmers remember it fondly. A decade or two ago, US fertilizer manufacturers shifted production away from TSP and toward MAP and soon domestic production of TSP ceased and it slowly disappeared from the marketplace. Download our fact sheet to learn more.

With funding from and Ohio Natural Resources Conservation Service Conservation Innovation Grant, AFT will incentivize agricultural producers in the watershed to switch fertilizers. AFT hopes to significantly reduce nitrate loading and improve the drinking water in the watershed and downstream communities, including the cities of Columbus and Marysville, as well as the water quality of the Ohio and Mississippi rivers ultimately improving the hypoxic dead zone in the northern Gulf of Mexico. Specifically, AFT is seeking to utilize an incentive-based program to substitute triple super phosphate, or TSP (0% N), for fall applied Monoammonium Phosphate, or MAP (11% N), and Diammonium Phosphate, or DAP (18% N), thereby eliminating nitrogen applied through the use of these two products during a time of year when the nitrogen can’t be utilized by growing crops.

We are dedicated to our partnership. Please contact us for more information. For those that are our partners, please use this “Private Resources“ page.