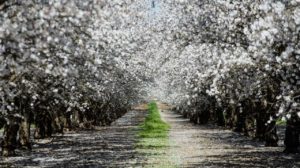 It for this very reason that AFT targeted its Saving Farmland, Growing Cities initiative toward Stanislaus County 30 years ago. With a focus on policies and planning that reduce the conversion of California’s agricultural land and promote smart growth, AFT partnered with Stanislaus County officials to deliver an update of the Agricultural Element of the county’s General Plan. Additionally, AFT convened the Stanislaus Farmland Work Group among local partners and officials to address farmland protection issues. As part of our San Joaquin Land and Water Strategy in Stanislaus County, AFT continues to track the effectiveness of the local farmland protection policies in Stanislaus County by partnering with the county planning commission and other local officials.

Through these experiences and learnings, AFT believes that we’ll be able to collaboratively achieve even more successful and promising local farmland conservation programs in California. Sharing our insights and knowledge is key to understanding that effective conservation of farmland is possible. There are a variety of ways to accomplish it, if we summon the political will to do so.

Stanislaus County is one of the most bountiful agricultural regions in the world. Ranked fifth in the state in agricultural production in 2017, the agriculture industry produced $3.6 billion worth of economic impact in the county. With extensive irrigated water fed by the Stanislaus, Tuolumne, and San Joaquin rivers, the county’s agricultural water source is considered among the cleanest, least expensive, and reliable irrigation sources in the valley.

Cities in Stanislaus County have faced unprecedented growth over the last half century. Between 2000 and 2010, 87% of the land that was converted to urban uses was high–quality irrigated farmland. Since this farmland makes up only 45% of the county’s undeveloped land, the high rate of conversion suggests that this important resource is being consumed at a disproportionately greater rate than other land in the county. The reason for this is that most development occurs immediately around the cities, and most cities are located in the midst of high–quality farmland.

In Modesto, residents took their local planning decisions to the ballot requiring public votes on sewer service expansion projects. Nearly 30 years later, citizens put forth a measure that required the public to vote on the rezoning of unincorporated agricultural land to urban uses.

At the county level, in 2007, the Agricultural Element, which had been in place since 1992, was updated in the General Plan. The new element included a Farmland Mitigation Program compelling developers to mitigate the loss of farmland by acquiring agricultural easements at one acre for every acre that their projects convert or by paying fees to enable land trusts to do so. Although this was challenged by the Building Industry Association, the State Supreme Court upheld the element. This led the way for the City of Hughson to adopt the most aggressive farmland mitigation program in the San Joaquin Valley requiring the preservation of two acres of farmland for every one acre developed.

Owing to years of work by the county, cities, and residents, Stanislaus County serves as an example of what is possible for the long-term protection of prime farmland. These existing regional successes serve as a foundation for the additional work that needs to be done. Elected officials continue to explore strategies to protect agriculture while farmland advocates press for increased land use controls. There is an understanding that farmland mitigation, by itself, will not control urban expansion unless it is accompanied by land use policies and/or urban growth boundaries that reinforce sustainable planning policies and practices. As strategies evolve, AFT remains committed to its goal of reducing the conversion of agricultural lands by 50%-75% by 2030. Together, we can save farmland while growing cities via strong collaborations, innovative land use and planning policy, and empowered communities.