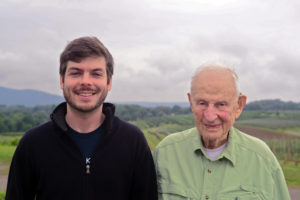 Tribute to a Farmer and Champion for Local Food

Many of you may have heard about the recent passing of Robert Morgenthau.  He was a legend, notably serving for more than four decades as the chief federal prosecutor for Southern New York State and Manhattan’s longest-serving district attorney.

It was lesser known that Mr. Morgenthau was a farmer.  He and his family own Fishkill Farms, a well-known apple orchard in southern Dutchess County.  Their farm was a meeting place for great figures in history.  He roasted hot dogs there with Queen Elizabeth and drank mint juleps with Franklin Delano Roosevelt and Winston Churchill.

I had the distinct honor of getting to know Mr. Morgenthau during his service as the first Co-Chair of American Farmland Trust’s New York Council.

Mr. Morgenthau blended his experience at Fishkill Farms, and political connections in New York City to be a tireless advocate for farmers and farming in the Hudson Valley, and in New York.

He believed strongly that all citizens benefit from having farmers nearby growing healthy food.  He also understood the challenges for farmers in growing this food – from pests that can destroy crops to challenges with low prices for farm products – and that they deserved the public’s support.

Robert Morgenthau was a particularly vocal champion of institutions, such as K-12 schools and colleges, buying food from local farms.  He was instrumental in the passage of laws in New York City and by the State of New York to start tracking the geographic origin of food purchased with public funds and to encourage purchasing from local farms.

This included a personal phone call to the former Speaker of the New York State Assembly on the last day of a legislative session to secure passage of the state’s ‘food metrics’ law.  Mr. Morgenthau also had personal conversations with former Governor David Patterson, Governor Andrew Cuomo and state Comptroller Tom DiNapoli to push for Executive Orders and other actions to encourage state agencies to buy more food grown in New York.

American Farmland Trust launched Farm to Institution New York State, a collaborative initiative to strengthen the economic security of farmers and the health of New Yorkers by empowering institutions to spend at least 25% of their food budget on foods grown in New York, with Mr. Morgenthau’s strong support.

Mr. Morgenthau was also a stronger supporter of protecting good farmland from real estate development.  The Morgenthau family worked with Dutchess Land Conservancy, Scenic Hudson, New York State Department of Agriculture and Markets and others to permanently protect Fishkill Farms.  He also joined American Farmland Trust at a ‘No Farms, No Food’ Rally at the State Capitol to push for greater funding for the State of New York’s Farmland Protection Program.

One of Mr. Morgenthau’s sons, Josh, is now managing Fishkill Farms and leading the business in a new, dynamic direction.  And, in 2018, Josh assumed the role of Co-Chair of American Farmland Trust’s New York Council.

This story of Robert and Josh Morgenthau, includes an audio recording of a conversation between them about Fishkill Farms.  Please join me in celebrating Robert Morgenthau – an amazing human being, a figure of history, and farmer.