Women Non-operating Landlords; What we are learning about conservation on rented lands - American Farmland Trust

Women Non-operating Landlords; What we are learning about conservation on rented lands 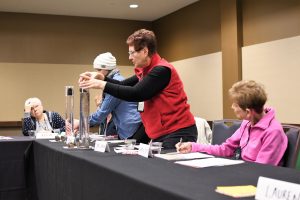 American Farmland Trust’s Women for the Land initiative has been working for the past six years to elevate the voices, stories, and needs of women landowners and farmers across many distinct regions in the U.S. We know that women are critically important to the management of farmland, with the most recent Agricultural Census outlining that women are principal or co-principal landlords on more than 50% of U.S. farmland. Furthermore, we know that women landlords, based on data from the National Agricultural Statistics Service TOTAL survey, make up a third of the ownership of land that is rented out by non-operating landlords, or what we call NOLs. We suspect, through our work with women NOLs, that this number is inaccurate, with many more women NOLs out there than we might have first suspected.

Given AFT’s work on women NOLs and women farmers, we sought to understand more clearly how male and female NOLs compare and contrast, particularly in their support for conservation management and the strength of their relationship with their farmer. We sampled both women and men NOLs in our recent survey of NOLs who own land in 11 states (including Arkansas, California, Illinois, Indiana, Iowa, Kansas, New York, North Carolina, Ohio, Texas, and Washington).

The data we collected is rich and complex, and we encourage you to check out our full report and executive summary to learn more. However, it is worth highlighting some interesting differences between women and men NOLs, particularly because these differences reveal some topics on which we hope to engage with women NOLs in the future.

However, our findings do suggest some need for targeted engagement with women landowners, as we found a gap in their knowledge and engagement with technical resources that might help them achieve more conservation and other desired outcomes on the land they own.

Some of our key findings show that women NOLS appear to be less empowered with knowledge about conservation and have significantly less experience as farm operators, no doubt contributing to their perceived lack of knowledge of agriculture. This lack of knowledge is also evidenced when asking about the involvement in various government conservation programs, where, as noted, women were at least two times as likely to indicate they did not know if they were involved in these practices or had received technical assistance for cost-share programs, receiving technical assistance, and developing or updating a conservation plan (See Table 14 from our report).

Previous qualitative work by AFT and our partners at Utah State University highlighted that lack of knowledge is a significant barrier for women non-operating landowners. The quantitative data from this NOLS survey echoes this finding. Thus, there is clearly great value our Women for the Land program can offer in cultivating and supporting networks of women who want to be more actively involved in the land they own but who may lack the resources, knowledge, or confidence to do so effectively.

Please check out our full report and state summaries to take a deeper dive into this work. Be sure to follow the good work of the Women for the Land program here at AFT as we lead the effort to collect this research, with Virginia and Pennsylvania to come this fall, and make sense of it for some time to come.

Women for the Land Director