The Alliance for New York's Farmland

Protecting Farmland and Keeping Farmers on the Land in New York

Check back for future opportunities to take action.

AFT leads the Alliance for New York’s Farmland – a coalition of farmers, land trusts, agricultural and environmental organizations, and other service providers advocating for public funding and policies to protect farmland and facilitate access to land for a diverse new generation of farmers. In 2018, the Alliance successfully advocated for the establishment of the Farmland for a New Generation New York (FNG-NY) program, and has continued to successfully advocate for funding for farmland protection and FNG-NY every year since.

What’s at stake when we don’t protect our farmland and support a new generation of farmers?

New York’s farmland plays a vital role in our economy and food security. Over 9 million acres of farmland, including some of the most productive, resilient, and versatile land in the nation, form the foundation of New York’s farm economy, which generates more than $47 billion in annual economic impact and supports 160,000 jobs in the state.

But New York’s farmland is severely threatened by high land prices and development pressure. According to Farms Under Threat: The State of the States, between 2001 and 2016 alone, over a quarter of a million acres of New York’s irreplaceable agricultural lands were lost or fragmented, earning New York a place within the top 20 most threatened states for farmland conversion. 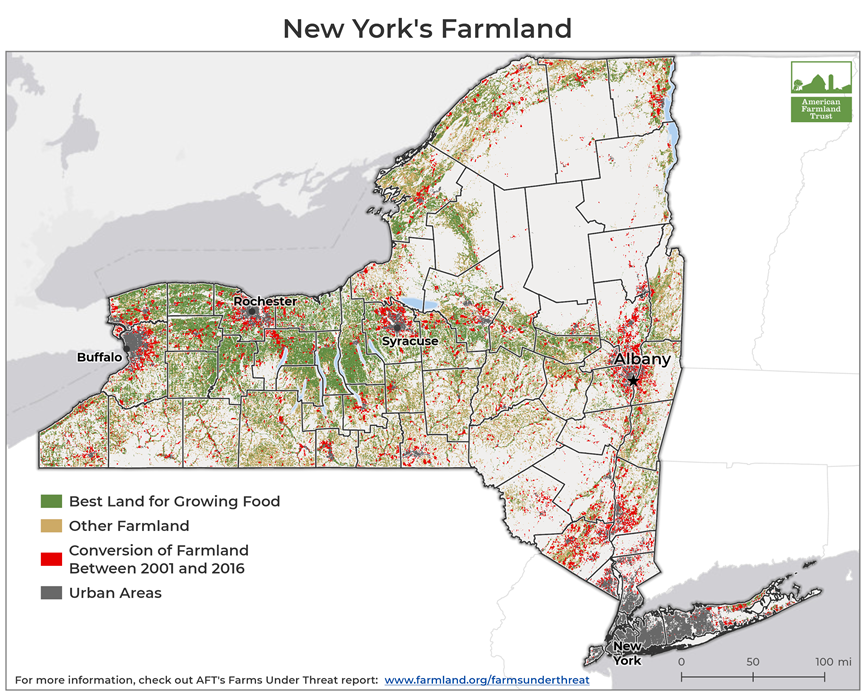 The Alliance for New York’s Farmland advocates for funding Farmland Protection programs in the New York State Budget, including the popular Farmland Protection Implementation Grants program in the Environmental Protection Fund. Farmland Protection is an important tool that keeps land in farming while enabling farmers to expand their operation, invest in their businesses or transfer their farm to a new generation.

A Coming Wave of Farmland Transition in New York

According to the latest USDA census, one third of New York’s farmers are over the age of 65, and these senior farmers own or operate nearly 2 million acres of farmland vulnerable to being lost as it changes hands in the coming years. It is critical that these farmers can access the support and resources necessary to plan for the future of their farms and pass them on to the next generation of farmers.

At the same time, young, new, beginning, and under-resourced farmers face major barriers finding farmland at prices they can afford with conditions that will enable them to launch successful businesses. This challenge is particularly acute for Black, Indigenous, and other farmers of color, who according to the 2017 USDA census make up less than 2% of farmers in New York state.

It is critical that we work to keep land in farming and bring a diverse new generation of farmers onto the land during this period of intergenerational transition.

Farmland for a New Generation New York is a nation-leading program designed to keep land in farming and bring a diverse new generation of farmers onto the land during this period of intergenerational transition. Continued support for this program and the Farmland Protection in the New York State Budget, and the passage of other policies to help a diverse new generation of farmers access land is critical to ensuring a bright future for farming in New York.

Farmland for a New Generation New York is a free, one-stop shop for farmers and landowners that offers a first point of contact and guidance from AFT’s expert staff and a website featuring farmer and farmland profiles, a farm job listings page, and event and trainings listings. A network of 27 Regional Navigator organizations funded through this program also provide one-on-one, on-the-ground support to farmland owners and seekers in all 62 counties of New York. 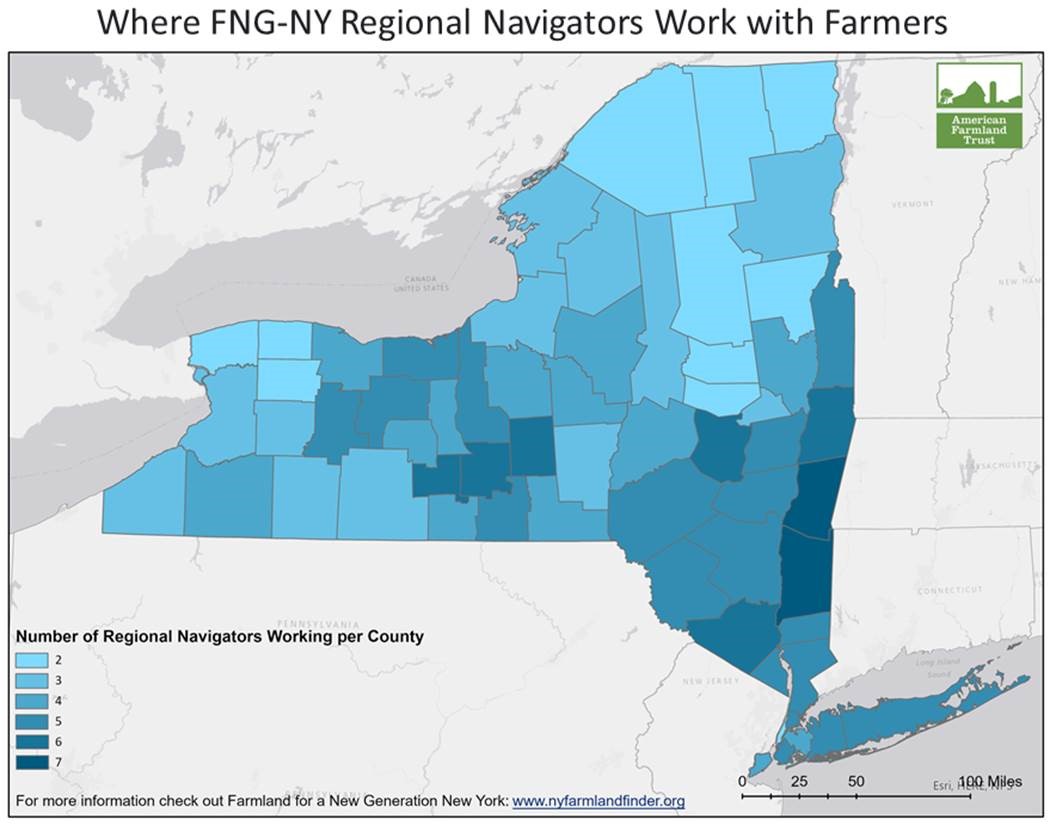 Farmland for a New Generation New York is a publicly-funded program coordinated by American Farmland Trust – in partnership with the state of New York, agricultural organizations, land trusts, and other non-profits – that connects farmers seeking land with landowners who want to keep their land in farming.

Press releases and other communications from the Alliance for New York's Farmland.